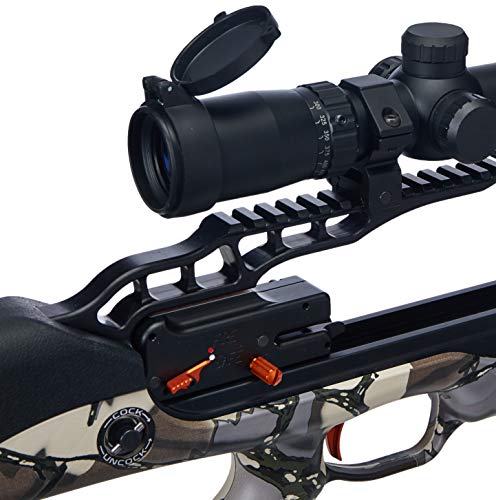 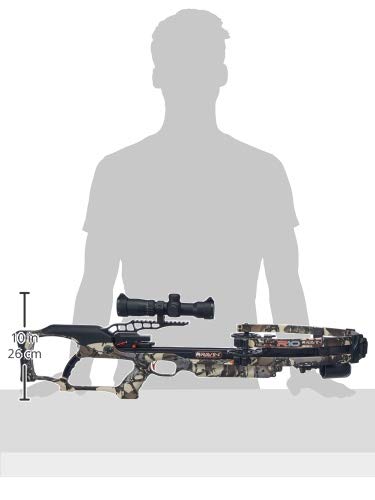 The R10 is one of Ravin’s flagship models, delivering large amounts of power from a small frame, a common theme among Ravin’s crossbows. Available in gunmetal grey or camo (although the camo carries an additional cost), the R10 handles itself well in all bowhunting applications, with the ability to take down even the largest bucks.

This package comes with 6 x Ravin arrows + nocks, 1 x mounted quiver and 6 x 100gr field point tips. A 100y mountable illuminated scope comes as standard, with built-in sling mounts, but unfortunately no sling, an inclusion I would have expected for a premium price tag.

The R10 is constructed from a molded polymer, which is extremely lightweight but, more importantly, strong. Its two-piece construction is almost skeletal, not just to provide comfort for the user, but to properly balance the crossbow when firing.

Even the most demanding bowhunter will be impressed with how surprisingly rugged the body is, considering the light weight, a good sign that this is a weapon that is sure to last numerous seasons.

Cams and limbs use Ravin’s Helicoil technology, which allows them to produce lightweight yet powerful crossbows. Not only that, but the system is designed to reduce friction between the moving parts, prolonging the lifespan of the crossbow.

For further peace of mind, a 5-year limited warranty is provided by Ravin, which is standard for all their models. However, they do recommend that the bowstring is replaced every two years, or after 200 shots and that you use their own branded string lubricants.

For longevity of your crossbow, Ravin suggests using only branded arrows and clip-on nock points. Fortunately, six are provided as standard with this package.

When using Ravin’s proprietary nocks, an audible click can be heard when the nock is correctly engaged with the bowstring, a nice additional safety feature.

Ravin does provide a complete guide to inspecting their arrows online (a practice all bowhunters should be following anyway), and it is noted that arrows lighter than 400 grains should not be used as this produces a dry-fire effect.

Also included is a quiver that holds three bolts and mounting bracket, a pretty standard affair and nothing out of the ordinary.

A Ravin branded scope comes as standard, with an adjustable external range drum for distances between 20 – 100 yards. Windage and elevation can also be adjusted on the fly, particularly useful for bowhunter’s used to hunting in more open environments or from a tree stand.

Fps needs to be accounted for, and the scope will need to be zeroed for the arrows you are using. Adjustable red and green illumination is also featured on the included scope, which is shockproof with fully coated fog-resistant lenses.

Sling mounts are included, but now sling. A disappointment at this price point, and we would suggest purchasing a sling to go with the R10. Ravin also has crossbow bags available for each of their models, which we would recommend as a worthy investment to protect your new crossbow when in transit or storage.

Bowhunter’s turn to Ravin when they require speed and power in a small, lightweight package and the R10 definitely delivers on all counts. The maneuverability of this model makes it perfect for shooting from a ground blind or in areas of dense vegetation.

Offering up enough kinetic energy to stop even the largest game, the R10 is no slouch with 400fps on firing with a 400grain bolt. All available for only #12 of draw weight.
Ravin suggests that you can get groupings comparable to a rifle at 100 yards, and while this is perfect for target practice, we wouldn’t recommend attempting a kill shot at more than 40 yards. No modifications are requiring for left-handed shooters, as the R10 is conveniently designed to be ambidextrous.

Like most of their crossbows, the R10 features their unique Trac-Trigger Firing System, auto-engaging the safety once the bowstring has been introduced into the archway bracket. An anti-dry fire system is concurrently engaged alongside the safety mechanism and is only deactivated when the bowstring correctly hosts a Ravin clip-on nock.

4lbs of trigger pull on the R10 makes this model stand out as one of the best trigger systems in the world for crossbows, rivaling many modern firearms.