Crossbows have been around for hundreds of years. Since they were used at the battle of Hastings, the crossbow has been through numerous upgrades.

With the technological revolution, crossbows have been getting better and better. In 2020, it’s almost impossible to choose a crossbow as there are so many accurate, efficient bows on the market.

TenPoint has been manufacturing industry-standard crossbows for almost 30 years, and has become a big name in the archery game.

Keep reading for our review of one of TenPoint’s best, the Stealth NXT. We’ve included a list of the features, and the pros and cons too. 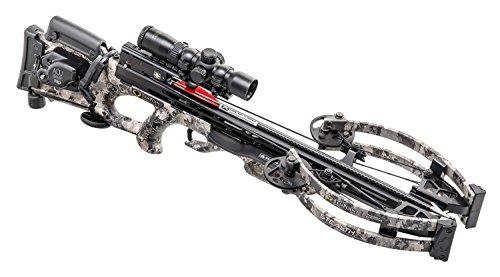 The Stealth NXT reaches outstanding firing speeds of 410FPS, which is notably above average. Speed is essential for shooting difficult game, and with speeds as high as this, you’ll be able to shoot big game like grizzly bears with ease.

This bow wields 144 FP of kinetic energy, which makes it a mighty powerful crossbow. With a high figure like that, you’d expect a big draw weight.

The draw weight is 220 pounds, which is one of the only downsides to this impressive crossbow – as it can require a lot more effort to cock.

Luckily, the AcuDraw technology makes it a lot easier to maneuver. The rope cocking mechanism is sophisticated and extremely well designed and cuts the draw weight in half.

The AcuDraw technology is revolutionary – It’s much easier to manage 110 pounds of draw weight and it makes the crossbow much more appealing.

The slightest bit of noise can make or break your hunt, and a noisy crossbow will make life a lot harder if you’re hunting game.

The Stealth NXT offers super-high speeds while managing to stay quiet while being fired. Due to the construction of the cable system, this crossbow is three times quieter than others of this type.

This crossbow has been designed to be incredibly narrow, which makes it so much more portable and easy to carry around with you. It’s the narrowest crossbow ever released by TenPoint.

The skeletal design ensures that no matter how powerful the bow is, it stays lightweight and compact.

When you purchase the Stealth NXT, you also get TenPoint’s highest-quality scope, the RangeMaster Pro Scope.

Not only is this bow powerful, accurate, and easy to manage, but it also looks great. The exterior is coated in a camo-pattern, making it a perfect match to the wilderness.

TenPoint has included three arrows with this purchase. The EVO-X CenterPunch Carbon arrows are described as the most accurate arrows for crossbows EVER. They are constructed from modulus carbon fiber and wrapped in an exclusive LAZER-TECH carbon weave.

Safety features are a necessity, even for the most experienced of hunters. The TenPoint Stealth NXT is engineered with safety features, including a super safe trigger.

The T5 trigger is one of the safest triggers on the market, with auto-engaging safety, and a DFI (dry-fire inhibitor).

The trigger is also suited to ambidextrous hunters, so whether you’re left-handed or right-handed, you’ll have no problems operating the trigger on the Stealth NXT.

The string latch design on the trigger makes this TenPoint’s smoothest trigger ever, with barely any friction when firing.

The combination of speed, narrowness, and accuracy make this the perfect crossbow for hunting large and fast game.

It wields a LOT of power for such a compact crossbow and is surprisingly easy to manage for such a powerful bow.

If you’re willing to loosen your purse strings a little, this crossbow is definitely worth purchasing, whether you’re experienced or a beginner.

This is an investment, and this crossbow will not only increase your enthusiasm for hunting, but it will help you hone your hunting/ archery skills.

Have you tried the TenPoint Stealth NXT? What are your thoughts on this bow?

Let us know in the comments below, and don’t forget to share this review with your friends!